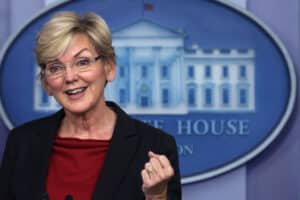 Granholm Attacks Gas ‘Hoarders,’ Says If Drove Electric Car Fuel Shortage ‘Would Not Be Affecting You’

The Biden administration’s secretary of Energy Jennifer Granholm has demonstrated her deadly combination of daft, dismissive and just plain stupid. In a White House press briefing on Tuesday Granholm expressed a flat-out lack of compassion for citizens in the United States as we deal with the serious consequences of a cyber-attack on one of our ...